The only thing that remains the same is change….

When did Paris change? Or is it us? It would be naive to think a place like this wouldn’t change. After all, Paris has been inhabited for over 2,000 years. Architects and bureaucrats have been changing this city for centuries. However, there have been some distinct changes since the last time we were here, just 12 years ago.

Paris has one of the highest population densities on earth. It’s the 7th most densely populated city in the world when compared to cities of over one million. There are over 58,000 people packed into every square mile. One would think this would make people a little irritable, and in some ways it does.

Some things are the same. Full Metro trains are quiet and people stoically walk down the street never making eye contact or saying hello. 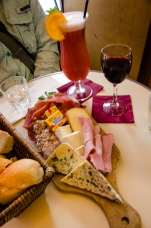 But walk into a restaurant and say in French that you don’t speak French and ask the server if they speak English and you will almost always get a smile and hear “a little”.

We stayed in a lovely work-a-day neighborhood in the southern end of the Latin Quarter (5th Arrondissement) near the rue Moffetard. Every morning, fresh food markets and restaurants unfolded along the avenue. There was even a Starbucks around the corner from our hotel. The Metro (subway) was a five minute walk; fifteen minutes later we’re in the center of the city.

We are familiar with Paris, and have visited most of the

major sites and a few of the lesser-known ones. We got to see the sites for the first time again through the eyes of our friends Ron and Jane. They joined us for several days and we did the Paris whirlwind tour: Eiffel Tower, the Louvre, Rodin, and Musée de l’Armée museums, Napoleon’s Tomb, Avenue des Champs-Élysées, Arc de Triomphe, Notre Dame, and others. It was exhausting and wonderful at the same time.

Friendly people, a lovely neighborhood, great access to the City and friends to share it with. What more could you ask for…

We are full-time RVrs living in a 40 foot Monaco Diplomat motorhome and touring North America.
View all posts by rkcaton →
This entry was posted in Photography. Bookmark the permalink.